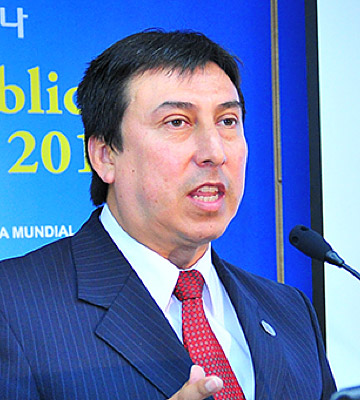 Many civilizations of the world believed that the origin of nature and life is in the mother, and served the mother as a goddess. Historical and sociological studies show that people wanted to have psychological stability. We are born, seeking the mother by nature. It is an innate feeling. We also need the spiritual and physical nutrients from the mother.

History is science. Science is a set of knowledge which is well organized, hierarchized, and systematized, and which is also able to be proven. When we look at history, we can find out that ancient cultures had a strong belief about the mother.

Many ancient cultures associated the mother with the beginning of life and of the creation, the one who gives life to living things, a part of what we call fertility, and the source of life. Chaldean-Assyrians, Egyptians, Hindus, Chineses, Greeks, Romans, and many civilizations of the world believed that the origin of nature and life is in the mother.

Let me take the Incan civilization as an example. The Incans served a goddess named Pachamama. They called her mama pacha or pacha mama, which means the mother of the earth. People believed that she was the beginning of all that existed. Then, why did they worship the mother? What did they want to have through the mother?

Why does manklind need the mother?

Spiritual, psychological, and physical stability contributes to social development. All these things come from the mother essentially. Psychology also affirms that the mother is an innate need in humans.

In other words, we are born, seeking the mother by nature. It is an innate feeling. And we have an instinct to be loved and comforted by the mother. We also need the spiritual and physical nutrients from the mother.

As I have told you, people in many cultures worshiped the female image that satisfies their psychological and physical stability. They regarded it as sacred because it satisfied their need, and they worshiped it as a goddess.

Mary of the Catholic Church is not God the Mother

The Catholic Church made good use of such psychology and established a goddess. They set up the statue of Virgin Mary which shows no response, and make people worship her before it. From the Bible, we can see that Mary was a woman who was chosen for the salvation work of God, but the Catholic Church exalted Mary, a mere creation, to the holy one whom people should revere and depend on.

People think that from Mary they can have love, emotional stability, peace, spiritual food, and kindness, which they want by nature. This is why they think Mary as the highest one in the world, and they even think that she is above God in heaven.

Mary is a creation of God, and she cannot be higher than the Creator. Even to those who trust in science, it is illogical, and this is why many scientists do not accept Mary as God the Mother. Mary is merely a woman who carried out a part of God’s work according to the prophecy. Mary is not God the Mother.

Nothing exists by chance. If everything has cause to exist, what made people regard Mary as sacred and worship her as a goddess? Everything in this world has its start and origin. To find the answer, let me give you a question. Does God the Mother really exist?

God the Mother in the scientific point of view

When we see nature, every living creature has a mother. Humans, animals, fish, birds, and even plants have life through their mothers. This is why scientists conclude that the existence of a father proves the existence of a mother, and no doubtful scientist denies gamogenesis.

Moreover, the male and the female are different in physical, physiological, and psychological aspects. We now know that there are great difference between males and females.

When we think of human brain, for example, the left brain and the right brain are closer to each other in a female than in a male. This is why the corpus callosum of the female is more flexible than those of the male. Although females are generally less capable of summarizing a book than males are, they are much better in detailed description. Females learn things faster than males do.

Some scientists even say that more females will survive than males when human beings face the doomsday. This is not a random result. This is a part of something that was preordained.

God the Mother in the Biblical point of view.

God did not use the singular form “me,” but a plural form “us.” This clearly tells us that there is God the Mother. Revelation 22:17 says that the Ones who give us the water of life are two—the Spirit and the Bride.

The Spirit and the bride say … and whoever wishes, let him take the free gift of the water of life.
Revelation 22:17

Our Father & Our Mother testified in the Bible

… “Come, I will show you the bride, the wife of the Lamb.” … and showed me the Holy City, Jerusalem, coming down out of heaven from God.
Revelation 21:9–10

Galatians 4:26 says about the Jerusalem that is above in heaven, and says that She is our Mother.

Through the Gospel of Matthew, we know that Jesus came to this earth 2,000 years ago and taught us that we should call God our Father. In the same way, the Bible says that we have our Mother as well.

The Bible definitely tells us that we have God the Mother as well as God the Father. The faith in God the Mother is not a coincidence. God the Mother has been always with us, and She searches us and has authority over us. She lives in us, and our souls recognize Her.

To fulfill the work of redemption, Mother has come to this earth in the flesh and gives us the water of life in this last age.