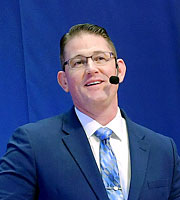 The pictures that you see here are of natural trees which have a man-made barbed wire fence running right through the middle of them.

When you look at this picture, how does it make you feel for the trees?
It feels uncomfortable or even painful.

This began to happen years ago, as a result of someone putting up this wire fence next to this these trees. However, as much time passed by the tree kept growing next to the fence and slowly, the fence wire became part of the tree. In the beginning, this could have been avoided, but, now, it is nearly impossible to remove the fence completely without damaging the tree.

This situation seems to show how we grow to hold onto many of our traditions over time.
Wherever we are born in this world, all our surroundings and the traditions we keep become ingrained in us as we grow up.

When people are asked “Why do we do this?”, they answer, “I don’t know, that’s the way I’ve always done it.”

In this way, traditions that people have been holding onto since childhood continue to remain in them as adults.

But what about something as sensitive and important as someone’s faith in which they define their spiritual identity?

Should we let the tradition of those who came before us dictate our spiritual formation, health, and destiny without considering the source?

There is a very famous short story called “The Lottery” by an American writer named Shirley Jackson. It is about tradition.

As the story begins, it feels like any other day in a pleasant little village as the weather is good, and the kids are out of school.

The towns people are preparing for their annual lottery which will only last about 2 hours. However, there is an underlying tension that can be felt among the townspeople that is obviously related to this tradition.

In the story, the children keep gathering stones and putting them in piles while the families gather together.

The actual tradition centers on an old worn-out ballot box in which little slips of paper with all the names of the towns people are put into, and the names are drawn one by one. As more and more names are drawn the people become increasingly uncomfortable until one name is drawn which carries a black mark.

The name of one of the women, “Tessie”, is drawn.

After Tessie’s name is called as the winner, all the townspeople proceed to pick up the rocks that were gathered earlier and stone Tessie to death.

This is how the story ends.

I chose to tell you about the short story because I believe it can help wake us up to ask questions about the origins of the traditions we keep, specifically, within Christianity today.

I chose the pictures of the trees to maybe help us realize things that we’ve grown to hold onto for so long being unaware of where they came from and why we hold on to them.

Both the trees and the townspeople have been living a long time with such painful conditions. They just accept them and continue to live with them silently.

Is it natural for a tree to sprout wire fence branches?
But now the tree is living with a fence in it.

Is there any reason why a village would stone an innocent person to death because they were drawn from a ballot box?
Yet these people are living by holding on to this tradition with unaware of origin.

Nowadays, Christianity has grown to over 2 billion in the world.
All Christians believe that Jesus is coming to give salvation to those with faith.

However, when Jesus spoke about the time of his second coming, He said that he would not find faith.

“I tell you, he will see that they get justice, and quickly. However, when the Son of Man comes, will he find faith on the earth?”
Luk 18:8

Here Christ says when He comes looking for faith, he will not find it. Then if Christ cannot find a faith worthy of salvation, who can be saved?

No Christian today would say that they don’t have faith, but the standard should be Jesus’ thoughts, not our thoughts.

Didn’t Jesus come the first time also looking for faith? Then what did He say to those who claimed to have the greatest faith 2000 years ago?

In the gospel of Mark 7:6-8 Jesus replied to them,

“Isaiah was right when he prophesied about you hypocrites; as it is written: “These people honor me with their lips, but their hearts are far from me. 7They worship me in vain; their teachings are merely human rules. 8You have let go of the commands of God and are holding on to human traditions.”
Mar 7:6-8(NIV)

The religious leaders and teachers of the law were holding onto human rules and traditions which became a great obstacle to their faith and caused them to forget the commands of God.

They had been believing in those traditions since they were children and were so confident in the way they grew up that they tried to stone Jesus and ended up crucifying the savior whom they had been waiting for.

So, when Jesus comes a second time, what kind of faith will Jesus be looking for?
Will it be the faith that that is holding onto human traditions?
He is not impressed with human traditions.

That’s why to those who believed Him, Jesus said:

“If you hold to my teaching, you are really my disciples. Then you will know the truth, and the truth will set you free.”
Joh 8:32

Question: How do we know that the Jesus whom people are believing in now is the same Jesus that came 2000 years ago?

So, let’s look into the basic teachings and examples of Christ.

In the gospel of Luke 4:16 It says that Jesus kept the Sabbath Day as was His custom. This custom was continually kept by the followers of Christ as the truth that sets them free.

The Biblical Sabbath Day is Saturday. They all went to church on Saturday.

Also, in the gospel of Matthew 26:17-19; 26-28
Jesus celebrated the Passover of the new covenant which He established for the forgiveness of sins to all who keep it at the appointed time every year.

In the letters of Apostle Paul, we also find the followers of Christ holding to this teaching as the truth that sets them free.

Also, Jesus told them how to worship God properly by having the men not covering their head with anything, and the women wearing veils during worship with no exception.

He passed on this teaching about head coverings from Jesus Christ.

Now, However 2000 years has past, and we can’t find any church that celebrates the Passover, keeps the Sabbath Day, and holds worship having the women wear veils.
Which are all God’s commands.

When we look around, Christianity and its doctrines have grown around teachings and traditions that are very far away from the teachings of the Bible. Unfortunately, this change started to come about from the mid-second century until the mid-fourth century.

when Papacy exercised its authority over the churches, it reshaped Christianity to follow Roman Sun-god traditions in the name of Jesus.

When we look into history, Sunday worship is established actually by a Roman law declared in 321 A.D. to venerate the sun. Christians in Rome were forced by fear of death to keep it until it became their tradition.

Also, December 25th which originates from the birth of Mithra, the Persian Sun god,
was absorbed by Christianity from 354 A.D. over 300 years after Jesus’ ascension.

Since then, all Christians have been observing these traditions which have grown in them over time unaware that their faith has now become based on such human traditions and practices, according to Jesus, “worshiping God in vain.”

Like the tree growing with a fence in it, or the village that holds to a senseless lottery.

Then, if the whole world is worshiping God in vain through observing man-made traditions, to whom will God give salvation?

That is why it is so important to understand that the second coming Christ has already come according to all the prophecies in the Bible.

And He has restored all of God’s teachings in our time.

In the book of Micah 4:1-2 it states that in the Last days all nations will come to Zion to be taught by God and walk in His ways. It says “Let us go” and “He will teach us His ways.” No one should miss this opportunity to learn from God.

Then, among all the churches in the world, which church has been taught by the second coming Christ and keeps all of God’s commands such as the Sabbath Day, the Passover of the new covenant, and the veil regulation?

It is only the World Mission Society Church of God which teaches and keeps the truth of Christ that sets us free.

I want to encourage everyone who wishes to come.

Please come study the Bible with the World Mission Society Church of God so we can let go of human tradition and receive the salvation of our souls having true faith holding on to God’s commands.