The Resounding Impact of Mother’s Voice 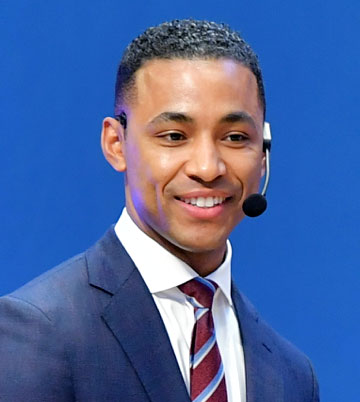 ABOUT THE SPEAKER
Kevin Clark
USA

The title of this presentation is the Resounding Impact of Mother’s Voice.

How is everyone doing today?
Here, I’d like to engage with you through one test.

For the test, I need your help. So could you please help me?
Thank you!

What I’m going to ask is very, very simple.

Here, on the screen you can see a math problem. The person I call on will need to step forward to solve and explain the problem.

It is quite simple, isn’t it?

Then, who shall come forward?

Now … you must be feeling that your heart is beating faster.

If I really asked you to come forward and solve this math problem, you would be stressed, no matter how difficult or easy the problem is.

Then, in that case, what is the best way to relieve your stress?

What would be your first option to get rid of the stress? Everybody has their own way to reduce their inner stress.

But now, I’d like to suggest another way.
That is “to call your mother.”

According to a study conducted at Wisconsin-Madison University observing psychological stability we can understand the influence a mother’s voice has on her child.

Leslie Seltzer, a biological anthropologist, examined a group of children from the ages of 7 to 12 with an impromptu speech and a series of math problems in front of a panel of strangers, just as I asked you to do.

At that moment, their hearts were racing, and the levels of cortisol, a hormone associated directly with stress, soared. Then, the children were divided into three groups.

The first group was comforted in person by their mothers.
The second group watched an emotionally neutral video.
The final group talked with their mothers over the telephone.

The effect of her voice was remarkable!

Of course, the first group who were able to interact with their mothers felt relaxed.

Surprisingly, however, even the third group who were able to interact with their mothers via phone also had virtually the same hormonal response as the first group.

The children’s levels of oxytocin, often known as the “love hormone,” rose significantly and cortisol vanished.

Previously, it was understood that when oxytocin is released, in the context of social bonding, usually it requires actual physical contact. However, these results reveal that even hearing our mothers’ voice can have the same effect.

In other words, our mothers’ voice, itself, makes us relax, as if our mothers are physically with us. In fact, you may have expected this.

However, our mothers’ voice gives us not only psychological stability but even more!

The Stanford University School of Medicine studied about how our brains get activated when hearing our mothers’ voices, by examining 24 children ages 7 to 12.

Every child’s mother recorded three words that do not make sense. The reason that the researchers had to use nonsense words is that using words that have meaning would affect a whole different set of circuitry in the brain.

The results of the MRI were more surprising. The brains were activated much more when they heard their mothers’ voice than that of the other women.

It was not only for the “primary auditory cortex” which is related to auditory sense. The mother’s voice affected several different regions of her child’s brain.

What was also extraordinary is that the children who had a stronger degree of connection between all these regions of their brain, when they heard their mothers’ voice also had the strong social communication abilities.

Reviewing the results, the lead author Dr. Daniel Abrams said that our mothers’ voice is helpful to not only communication skills but also our ability to form interpersonal relationships. When children spend more time with their mothers and listen to their mothers’ voice, they can develop successfully and live in harmony with others.

Like this, a mother’s voice has a great effect on a human.

Then, is it only for our physical body?

Then, how can we receive our heavenly body from God?

When we look in Revelation 4:11 and Romans 1:20, it says that all things were created by God’s will and God’s invisible qualities and divine nature are clearly seen, being understood from what has been made.

Therefore, we can clearly understand how we can receive a heavenly body from how God allowed us our physical body.

A mother gives life to her children

As you know, physical mothers suffer extreme pain, shedding blood, during pregnancy in order to bear a child. As a result, a mother and her child are tied by love throughout their entire lives.

The Bible also says in Galatians 4:26, “The Jerusalem that is above is free and She is our Mother.”

As you know, we do not call any woman “mother.” Only the woman that gives birth to us is our mother.

Therefore, the woman that gives birth to our soul is our spiritual Mother.

The Bible clearly explains and testifies that just as our physical bodies are given birth by our physical mothers, our spirit is born again through the spiritual Mother.

God created our earthly mothers according to heaven’s will, so that we can clearly understand Heavenly Mother.

The first experiment we discussed is the scientific evidence that proves our physical mothers’ voice directly removes stress from our lives in this chaotic world. This clearly illustrates the power of the spiritual Mother’s voice to remove and cleanse our souls from the pain caused by our sins.

The second experiment identifies the fact that our earthly mothers’ voice holds the greatest influence on our emotions, development, and overall life.

Therefore, our Heavenly Mother’s voice has the greatest authority in transforming, recreating, and completing us by Her every word.

From all these we can make a conclusion that every personal problem can be solved by following the voice of our Heavenly Mother.

Her voice rewires our brain and soul!

Then according to the scientific evidence, what does the world need to solve all the problems originating from a lack of communication and broken harmony? The solution can also be found in our Heavenly Mother’s voice!

Heavenly Mother in the flesh

However, the Bible foretells that one day our Spiritual Mother would come down from heaven to this earth.

In Revelation 21:9, John heard, “Come, I will show you the bride, the wife of the Lamb.” And he wrote that “he carried me away in the Spirit to a mountain great and high, and showed me the Holy City, Jerusalem coming down out of heaven from God.”

The Bible depicts clearly and vividly our Heavenly Mother coming down out of heaven to this earth.

Then why does She need to come down to this earth? It’s because we need to hear Her voice.

The Bible shows us that our Heavenly Mother will appear on the earth in the flesh so that we can hear Her voice.

As if the biblical evidence was not enough, God has given us even scientific evidence so that we can realize why our Spiritual Mother comes down out of heaven to this earth.

Heavenly Mother has appeared on this earth in the flesh, so we can hear Her voice that impacts us to become Her children and be saved.

Therefore, when we know, obey, and absolutely believe in Jerusalem Heavenly Mother, She will fulfill the prophecy that the least will become a thousand and the smallest a mighty nation.

In conclusion, it’s an undeniable fact that we desperately need to hear Heavenly Mother’s voice, for our own benefit and the benefit of those around us.

Then why does the Heavenly Mother’s voice have an unparalleled impact on us?

As our physical mothers created an unbreakable bond with us through their painful suffering for nine months, our spiritual Mother from heaven is recreating us through Her hidden sacrifice for over 6,000 years. She makes us complete with Her untiring, eternal love through Her words of life.

Then, is there any voice, music, or sound that is more valuable, precious, or beneficial for us to hear, other than our Heavenly Mother’s voice? According to the concrete evidence, I’m sure you’ve found the answer.

Thank You Heavenly Mother so much for always guiding us with Your Voice containing Your patient love and boundless sacrifice!